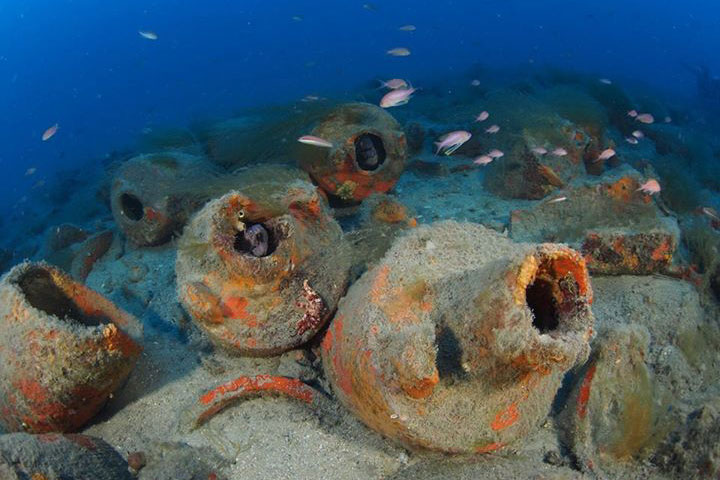 In Liguria and precisely in the seafloor the town of Albenga (Sv) is one of the most important underwater archaeological sites of our beloved country, "The wreck of the Roman ship ".
The first finds date back to the early '900, amphorae from the Roman period were found by a fisherman at about 40 feet deep and 1 mile away from the coast.

He had to wait until 1948 for the first organized and works of recovery of the remains from the ship. Were never found remains of the ship that was used to transport goods but many amphorae were transported.

HISTORICAL IMPORTANCE
The Roman ship of Albenga is an important historical moment for the Italian underwater archeology. Besides being important for its load of very ancient times, on the site were carried out works of pioneering underwater recovery for the time that they then turned further studies by "Italian archaeological industry", thus marking an extremely important moment for our country at the level diver.

THE SITE
The amphorae lying on a sandy bottom at a depth of 40 meters in front of the town of Albenga (Sv). Descents and ascents are through peaks and pedagni specially placed for divers. The local diving and authorized are allowed to stop and wait for the divers carry their explorations.
The amphorae cover an area 40 meters long and wide 16. In this space the jars are many, many still intact and the same have become the lair of conger eels, moray eels and sometimes even lobsters.
The immersion is not particularly difficult but given the depth it is recommended to possess patent for deep diving and possibly a patent for the use of the mixture of air enriched. It is not a patent pending on wreck diving.

DIVING
Scuba diving at archaeological purposes have made since the mid-50s, as we said with pioneering techniques. Recreational diving was possible until the mid-2000s due to thefts authorities and institutions then decided to stop the underwater activities and to open investigations to trace those directly responsible.
Many were the years of waiting to see unlocked the site of the Roman ship. From 2014 the Ministry of Culture, in conjunction with the Harbour Local finally authorized the local diving to return to dive during the openings "extraordinary". Today, under the supervision of the Ministry and the Port of Loano, you can dive in and enjoy a unique show of its kind in Italy.

MARINA DIVING LOANO
Corrado Ambrosi, owner of Marina Diving Loano, has worked closely with the authorities and local institutions so that there was again a chance to immerse themselves in this fascinating wreck.
Marina Diving PADI is the only center in the area authorized and his staff, in conjunction with other local diving, has reclaimed the archaeological objects from various materials and pollutants that disfigured the show underwater restoring luster to the right site.
During last July, a team of divers friends Marina Diving conducted an immersion specific and dedicated to photo surveys / video and also site mapping.

WHEN AND HOW TO DIVE
Special openings are determined by the Ministry of Culture in certain times of the year. It 'must be booked in Corrado Ambrosi Marina Diving. Have already been two weekends where many divers were able to admire the show underwater during the summer just ended. And 'pending a further date by 2014. For information or reservations, please telephone the Training Centre Marina Diving PADI instructors at the phone number +39/3356611106 - Corrado Ambrosi or by sending an email : This email address is being protected from spambots. You need JavaScript enabled to view it.

This site uses cookies, including third parties, in order to improve your experience. By closing this banner, running this page or click any element thereof consent to the use of cookies.